Congratulations to all who made it! Please let me know if I omit any name. Thank you! Four are missing from this picture. Here is the list of qualifiers for the 2007 Susan Polgar National Invitational for Girls:
http://susanpolgar.blogspot.com/2007/07/2007-sp-national-invitational_22.html

There opening ceremony will begin at 9 AM. This is a mandatory meeting where all the details will be announced.

Rounds will start at 11 AM each day. The time control is FIDE time control of 90 minutes per game with 30 seconds increment per move. List of qualifiers for the 2007 Susan Polgar National Invitational for Girls (July 29 to August 3, 2007)

IF you qualified and your name is NOT listed, please send me an email immediately (SusanPolgar@aol.com). Thank you!

Qualifiers from the Susan Polgar National Open Championship for Girls:

Qualifiers from the Susan Polgar World Open Championship for Girls:

Some information about the invitational:
http://www.susanpolgar.com/susan-polgar-foundation-invitational.html

Rules and conditions of the invitational:
http://www.susanpolgar.com/rulesinvitegirls2007.pdf

If you need a roommate, please send me an email. I will try to get you in touch with others who may want to share rooms. I hope to have the list of the qualifiers of the Susan Polgar National Invitational for Girls from the USCF shortly. The 2007 Susan Polgar National Invitational for Girls, the most prestigious all-girls event in the United States, will take place from July 29 to August 3, 2007 in Cherry Hill, New Jersey.

The venue will be:

Here are the links for the official rules as well as the information of the venue: The first annual Susan Polgar All-Star Girl's Training will be held at the prestigious New York Athletic Club in New York City. It will take place from July 24 - 27 between 10 AM and 4 PM each day.

Here is the list of the players who qualified for this special training:

Congratulations to all who have made it!

Here is the direction to the NYAC.

Here is the dress code for the NYAC. Congratulations to Ellen and Evan, the first ever sisters to qualify for the Susan Polgar All-Star Chess Team! The Annual Susan Polgar National Invitational for Girls, the most prestigious All-Girls tournament in the United States, will be held this year from July 29 to August 3, 2007, alongside with the 2007 US Open in Cherry Hill, New Jersey.

There are 2 additional OFFICIAL QUALIFIERS each year:

The winner of each section (must meet age requirement) in these 2 qualifers will receive an AUTOMATIC invitations to the Susan Polgar National Invitational for Girls.

In addition, the Polgar Committee will award three automatic qualifying spots at the 2009 SuperNationals Chess Championship to the top finishing girls in the open division of the Elementary (K-6), Junior High (K-9) and High School (K-12) Championship sections. 1. The tournament will be played during the U.S. Open Championship each year. Starting time of each round will be at 11:00 A.M. The time control will be 90 minutes for the entire game with 30 seconds increment added on per move. This is the approved FIDE time control. Registration will be required at pre-tournament registration.

Exception: If a player graduates from High School early and already attended college, she may still represent her state if nominated. This is solely the decision of each state. However, that player may not win the scholarship.

VERY IMPORTANT NOTE: Unlike the Denker Tournament of High School Champions, the participants of the Susan Polgar National Invitational for Girls DO NOT have to be High School students. Any qualifier under the age of 19 (by August 15 of the year in which the tournament is held) is eligible!

4. Players will be required to play in and complete all six rounds of the tournament. Failure to do so, without permission of the Tournament Director, will result in a forfeiture of expense monies.

5. Player will be required to furnish the Tournament Director with a legible and complete score sheet.

6. Players will be required to furnish the Tournament Director an emergency phone number and an e-mail address of a parent/guardian.

7. Players are responsible for their own travel and hotel expenses.

8. Players who complete the tournament will receive an equal amount from the sum of $5,000 in travel stipend, which is provided by the Susan Polgar Foundation.

There will also be a $500 Ursula Foster scholarship awarded to the highest finisher who is under the age of 14. This is donated by the family of the late Ursula Foster in her memory. If there are ties then the money will be divided.

10. The winner of the tournament will be crowned the Susan Polgar National Invitational Champion. In case of ties, co-champions will be recognized and each will receive the Champion’s Plaque or Trophy.

11. Texas Tech University agrees to award a four-year academic scholarship to the highest finishing player who has not graduated from high school by August. In the case of ties for these scholarships, tie-breaks used will be:

1. Modified Median
2. Solkoff
3. Cumulative
4. Cumulative of Opposition, in that order.

13. A scholastic girls’ champion or the highest rated girls’ scholastic player in a state that has no state affiliate of the USCF should contact the Chairman of the Polgar Committee who is currently:

14. The Chairman of the Polgar Committee and its members may elect to award 2 or more wild cards each year for the Susan Polgar National Invitational for Girls based on very special circumstances and in its sole discretion.

These events are opened to all participants and alumni of the Susan Polgar National Invitational for Girls.

16. In addition, the Polgar Committee will award three automatic qualifying spots at the 2009 SuperNationals Chess Championship to the top finishing girls in the open division of the Elementary (K-6), Junior High (K-9) and High School (K-12) Championship sections. I started to learn chess when I was almost six. About a year later, I started to go to chess tournaments and began my trophy collections. I started playing adults about a year ago. Playing adults is fun and help improving my chess skills. Recently, in February 2007, I won in tiebreakers in a first place tie in the MA state championship for 11 & under. I also won first place for fourth grade in MA grade chess championship. I love to play chess and hope to beat a master soon. Besides playing chess, I also enjoy playing the piano and building LEGOS. 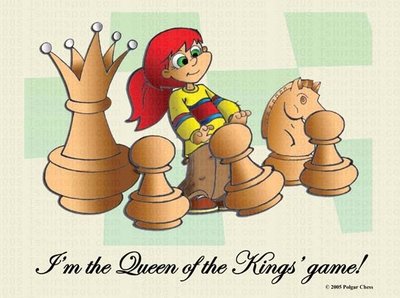 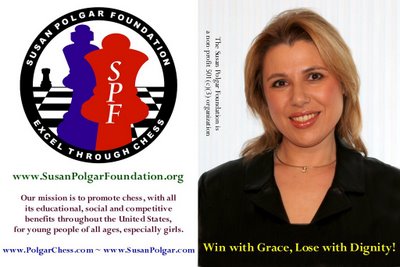 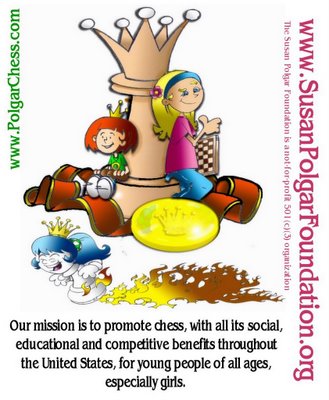 Awesome Prizes in Both Events!

Special Susan Polgar Mini Chess Camp on the morning of 2/19!