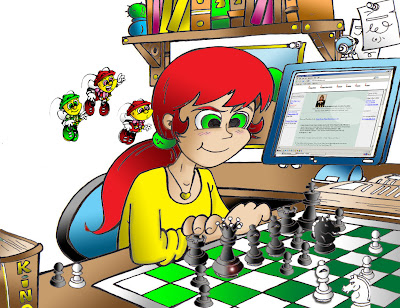 Carmen Pemsler’s enthusiasm for chess continues to play itself out in victories all across the country. The 13-yr old Eagle resident has been playing chess since the tender age of six. Her recent outstanding performance at the Western States Open annual tournament in Reno, NV earned her a personal United States Chess Federation rating high and a generous cash prize. Carmen’s tie for second place meant that she had to best some tough adult competitors in round after round. It also put her within striking distance of reaching her immediate goal to make it on the Top 100 list in the entire U.S. for girls her age.

Carmen was introduced to the game by a chess champion himself, Daniel Vellotti, owner of Vellotti’s Chess School. Coach Vellotti says that Carmen was always an outstanding student who was instantly intrigued by the challenge of learning the royal game.

“Carmen is that really rare student whose passion for the game only increases over time.” Vellotti says. “She sets goals for herself and works hard to achieve them.”

This inspiring chess player started out winning local scholastic tournaments and has since advanced to regional and national competitions for adults. Her long-term goal is to become Idaho’s first female grandmaster. Her coach says that this is entirely possible as Carmen has embraced the idea of chess as an international language.

“Carmen has a good grasp of chess as a universal communication tool and a great way to make friends. These qualities will be important for her as she eventually travels around the world in pursuit of her hopes and dreams.”

Her mother, Alise, also supports Carmen’s goals in chess, even though it now means that they must travel around the country to find the best competition. She really enjoys that her daughter has chosen to pursue an unplugged activity.

“Carmen loves to explain her games to me. Each new tournament victory makes Carmen want to work harder the next time. She really comes alive when she plays chess,” says mom.

Besides winning more tournaments, this soft-spoken girl has a deeper wish. She hopes to someday return to her birthplace of Guatemala. She plans to visit the orphanage where she was adopted from at the age of 2, and serve as a source of inspiration for girls still looking to find permanent homes.

“I want to let all the girls know that their dreams can come true someday- just like mine did.”

When asked why a modern teenager would devote so much time to playing a game over a thousand years old, Carmen gives an answer that anyone could understand.

“Chess is fun, and it makes me happy.”