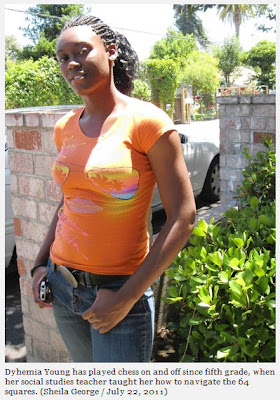 This is in the front page of the LA Times today!

It takes many moves to find missing young chess whiz

When news came that Dyhemia Young had been invited to a prestigious chess tournament, the 16-year-old San Franciscan had vanished. Her mentor, founder of the Hip-Hop Chess Federation, was worried.

Reporting from East Palo Alto, Calif.—
When Dyhemia Young was invited to compete in a prestigious all-girls chess tournament, at first it looked like the biggest hurdle would be raising the money to get her there.

The Susan Polgar Girls' Invitational takes place each year at Texas Tech University in Lubbock, and the price tag for flights and accommodations was around $1,600 — a hefty sum for a 16-year-old from San Francisco's hard-knock Bayview District.

The top-rated girl from each state is invited to the annual event. Polgar, the first woman to earn the title of grandmaster, also issues two "wild card" invitations to gifted players who haven't cracked into official competition. It's a world some liken to preparing for the Olympics, with its need for money, lessons and dedicated parents.

But when Adisa Banjoko, founder of the Hip-Hop Chess Federation and Dyhemia's mentor, tried to call her in mid-June to tell her the good news, he realized the money would probably be a lot easier to find than the chess player.

Dyhemia, the very definition of wild card, had disappeared.

None of the phone numbers Banjoko had for her worked anymore, and he hadn't seen her since school let out. No one at John O'Connell High School, where he is a security guard and Dyhemia was a student, had seen the striking junior with the almond eyes, bright smile and sharp mind.

"I reached out to other kids who had gone to O'Connell on Facebook," he recounted. "I figured between Facebook and people who worked there, if that's not going to pull it off, that's bad."

Banjoko describes his protege as "a really good girl with a tumultuous home life. She's a very delicate plant in very harsh weather conditions. It's not whether or not she's a good flower. It's 'are we going to get the conditions right to help her bloom?' So far we haven't."

Dyhemia has played chess on and off since fifth grade, when her social studies teacher taught her how to navigate the 64 squares. She played for a year with Banjoko and the Hip-Hop Chess Federation in ninth grade, and he was struck by her skill. Last year, though, she began to back off.

The federation melds music, martial arts and the game of kings to teach young people the skills to help them through their difficult lives — traits like patience, planning, thinking ahead. Banjoko runs the West Coast operations; Lisa Suhay, a children's book author from Norfolk, Va., leads the East Coast effort.

With Dyhemia scarce and time running out, Suhay hit the computer. A Google search of the girl's name went nowhere, but a check of Google images June 24 gave Suhay and Banjoko their first lead: a missing person's poster from 2008.

"Missing Juvenile," its headline blared, above black-and-white photos of a wistful 13-year-old. "LSW: Blue jeans, possibly with a red jacket. Hair is in a pony tail." And finally, a phone number for the San Francisco Police Department.

Suhay emailed the poster to Banjoko. "Missing persons on her from '08," she wrote. "This our girl?"

Suhay dialed the number and was transferred to Det. Joseph Carroll, with the missing person's unit. "I'm going to make the strangest request you are going to get all week," she told him. A half hour later, he called back. "I've got a line on her," Carroll said. But it would take nearly a month for them to connect.

Dyhemia has been in and out of the foster care system for the last three years. Recently, it turned out, she had done a brief stint in juvenile hall — officials will not disclose why — before being sent to the East Palo Alto Teen Home on June 30. That's where Carroll tracked her down last week.