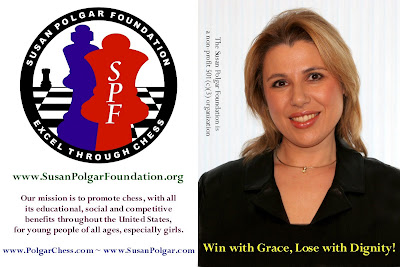 The most famous female chess player in the world is returning to Fresno - and this time with her sister.

Susan Polgar, the Hungarian-American Grandmaster, and sister Sofia Polgar will play in an exhibition tournament at 1 p.m. Saturday at Alta Sierra Intermediate School against up to 100 opponents, skilled or novice, at the same time. The event is presented by the Fresno Chess Club and Clovis Unified School District.

Sofia Polgar, a former international master player who is retired, is coming from Rishon, Israel. The Bee caught up with Susan Polgar, who lives in Lubbock, Texas, to talk chess.

Question: What was the most memorable thing about the first time you played chess?

Answer: I was 4 years old when I discovered chess. At first, it was only the shape of the pieces - how beautiful they were. I loved the queen and the knight. Then came the actual purpose of the game, and the challenge excited me.

Can you have fun and still be a world-class chess player?

Absolutely. You can set all sorts of challenges and try to play beautifully. There are a lot of tricks that make the game beautiful. Obviously, I wouldn't do something just for fun when it was a serious championship match. In practice games, that's a different story.

Who is your favorite chess player - and why?

Chess is best played in which country?

Chess has the most culture in Russia and Ukraine and the former Soviet Republic. Chess was supported in those countries through the Communist era, as they tried to show political power. Every couple's wedding gift set included a chess set. Chess is huge in those places just like baseball and football would be here. Other countries, like China and India, have had a huge chess boom in the last two decades.

What do you remember most about your last Fresno visit?

I remember the warm sun and the welcome of the Fresno Chess Club. I had an awesome time and decided to come back with my sister. I won 62, and there were two draws.

Are you and Sofia similar or different chess players?

I am more conservative. Sofia has a more romantic style. I put more focus in competition. She has retired from competitive chess. She is quite an artist.

What do you want to accomplish at the Fresno exhibition?

It is a show like you would see at a Los Angeles Lakers game. So I want to inspire people to know chess is a fun activity and something they may want to do as a pastime. It is something that can bring different generations - and genders - together.

Wish you all well! Sounds like a lot of fun! Great to play such amazing players!