Matt Lasley taught his daughter how to play chess. Now Alexa can school her dad in the game.

Alexa, a home-schooler from Black Forest, is preparing to travel to Texas for the Susan Polgar National Invitational for Girls, being held this summer at the Susan Polgar Institute for Chess Excellence. Alexa, who has been playing chess since about age 7, scored the opportunity to attend the invitational when she won second place in the Colorado State Scholastic Chess Championship, where she played against ninth- to 12-graders. Alexa was the youngest competitor, but she beat five of the six players she battled. As the female competitor with the most points, Alexa said, she had won her way to the Susan Polgar competition.

Susan Polgar was the first woman to qualify for the men's world championship, in 1986, and earn the men's Grandmaster title. Her Institute is dedicated to boosting the popularity of chess among all people, especially girls.

Tell me about the Susan Polgar Invitational.
"It's in late July, and I think a little of it's in early August. And it's a week long, and you play every day."

What do you like about chess?
"I don't know. It's lots of fun, and it makes you think."

What do you want to be when you grow up?
"Maybe an author, but I'm not really sure."

What are some of your hobbies besides chess?
"I like reading a lot. In the summer I catch lots of butterflies."

Who inspires you?
"My mom and dad."

Alexa said her whole family plays chess. "Except my mom doesn't play chess. She says she has other things to learn." 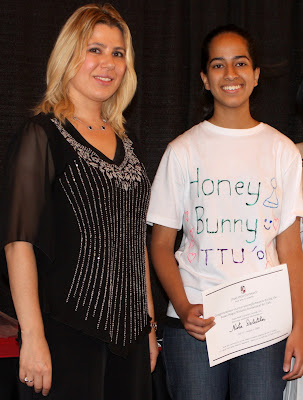 "We look for people that really strived, who might have lived lives of difficulty, but did it with joy," said Catherine Priamos, a Poly High School junior and member of the Youth Council. "Caitlin Hutchinson excelled academically on top of sickness and becoming blind. Now she's learning Braille and still excelling."

Nisha Deolalikar, a senior at Poly High School, took the title of Most Remarkable Teen for her academic accomplishments and her research internships at the National Institute of Health and UC Riverside. She is also a nationally-ranked chess player, having taken first place at the Susan Polgar National Invitational and first place at the California Super State Chess Championship.

"It's a great honor to be here among the amazing teens of Riverside," Deolalikar said.

"My hope is that some of these incredible teens go out ... they get that education and hone those talents," said Councilmember William "Rusty" Bailey. "And then, they come back to Riverside."

Born into a family of chess enthusiasts


Morgan Mahowald was born into a family of chess enthusiasts. “I’m one of the only kids I’ve run across who competes in tournaments but can’t beat their parents.”

Morgan Mahowald, a 17-year-old Robbinsdale Cooper High School senior, was born into a world of chess.

Her parents met each other at a chess club and said that, as a baby, she used chess pieces to teethe -- and she played her first tournament at only 3 years old.

"Chess isn't a game, it's not even really a sport, it's a way of life," said Morgan.

Morgan also qualified for the national tournament last year and is making a repeat appearance.

Despite Morgan's success, she stays grounded, perhaps because she's not even the best chess player in her family.

Her dad, Matt Mahowald, is a veteran tournament player, a chess coach and holds the national title of a chess master -- he said it's not uncommon for him to spend up to eight hours preparing for a single game. Her mom, Daa Mahowald, is one of the stronger women players in the area, and organizes chess camps for girls. The Mahowalds also run the chess club at Cooper.

To have a family so involved in chess is rare, Daa Mahowald said. Many kids who participate in national tournaments are coached by professional chess coaches who can charge up to $100 per hour, she said. Morgan just takes lessons from her dad.

"I'm one of the only kids I've run across who competes in tournaments but can't beat their parents," Morgan said.

Although Morgan had played chess nearly all of her life, she didn't truly start taking the game seriously until about two years ago when she went with her dad to play chess at Santa Monica pier in California -- an area well-known by serious chess players.

While there, Morgan played a variety of interesting people, and many of them were beach bums who she said "were actually really good."

"I've never had so much fun playing chess before," she said.

The official launching of PCU

Sign up now for a one year plan and get an additional three bonus months plus one year of World Chess Live membership FREE! For just about $1.50 per week, you can learn from the best! Just enter the code “SuperNationals” when you sign up.