It helps to know that you’re not alone 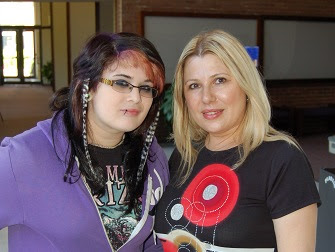 MERRIWETHER – In a hard-fought midwestern series, S.C. Chess Champion, Tori Whatley, suffered a few setbacks in a Missouri tournament and then battled fiercely for a trophy finish in Indiana. As an official invitee to the 9th Annual Susan Polgar Girl’s Invitational, Tori Whatley walked across the stage at the Loretto Hilton Center on the campus of Webster University in St. Louis to accept her medal from the Susan Polgar Foundation.

The invitational tournament was played from July 22nd through July 27th, and was one of the most competitive Polgar tournaments in recent years. The tournament featured a blitz match, in which, she won 3.5 out of 7 games. In the main event, she scored 2 out of 6 games, with a round 5 mistake costing her the opportunity to match her Polgar series best of 3 points. “We left one on the table in round 5”, reported Merriwether Mavericks chess coach, David Whatley. “Tori was firmly in control of the game, but a miscalculation swung it in favor of her opponent”, he said.

Missouri’s Zoe Lemon took round 1 in an exhausting King’s Indian Defense (E61) that lasted for 67 moves. Another Missourian, Kendra Fee, fell to Whatley on her 38th move in round 2. Jiaying Cai from Maine won round 3 in 50 moves. Arizona’s Bria Castro would win the round 4 Reti Opening (A04) in 32 moves. The round 5, Pirc Classical (Two Knights) System (B08) went to Yvonne Ward of Utah. Tori faced Gisele Delgado of Texas for the final 6th round. Gisele played a valiant Reti, but came up short against the Palmetto state champion. Whatley gave all of her opponents a Frisbee with the South Carolina state flag printed on them.

Tori commented on how much she enjoys the strong field of female competition. “Not enough girls play chess, but when you come to the Polgar, you can see that there are many strong female players. It helps to know that you’re not alone, and I want to thank Susan for giving us the opportunity to play and for showing us that we can achieve anything we put our minds to.”

Tori’s first opponent in her 2008 Polgar debut, Michelle Ferrell from Oklahoma, flew in from Washington, D.C. to root for her younger sister, Hannah, who is the current Oklahoma champion. Upon sight of one another, Tori and Michelle jumped up for quick hugs and some catch-up conversation. “Their reunion embodies the spirit of this competition. When these girls leave here, they are friends for life”, said Mr. Whatley.

Before leaving St. Louis, the Whatleys visited the City Museum, the Gateway Arch, the World Chess Hall of Fame and the St. Louis Chess Club & Scholastic Center, where Tori was photographed with International Grandmaster Ben Finegold.

After an evening drive, the Whatleys arrived in West Lafayette, Indiana where Tori played the following day in the “Summer Knight” chess tournament, a five-round scholastic event, on the campus of Purdue University. She “galvanized” during the drive, according to her father. The determination resulted in her going 3 out of 5 against a sturdy field and securing the fifth place trophy.

Swinging back over to Springfield, Illinois, father and daughter spent a little time visiting one of Mr. Whatley’s former shipmates who was kind enough to take them on a tour of Abraham Lincoln’s Tomb. They also visited Mr. Lincoln’s Presidential Museum and the village of New Salem, where the 16th president resided for several years.

Tori and her dad, David, are looking forward to coaching the Merriwether Mavericks Scholastic Chess Club, which will celebrate its 10th year this coming school year. Tori’s sister, Mandy, serves as club secretary and coordinator, making the club a real family affair. The club is open to all Merriwether elementary and middle school students. Mr. Whatley’s association with national chess author, John Herron, will result in this years club being the first in the country to use “Total Chess - Learn, Teach and Play the Easy 1-2-3 Way” as its curriculum.

For more information you can send an email to Mr. Whatley at whatleydavid@bellsouth.net, or visit their Facebook page at Merriwether Mavericks Scholastic Chess Club to see more about the program. Mr. Whatley can also be reached at his home phone, 803-442-9060.

48 qualified and invited players represented their respective states to compete for more than $150,000 in scholarships and chess prizes.

Hour long discussion on WPR about the benefits of chess


Hour long discussion with Susan Polgar and Lisa Suhay about many benefits of chess, especially for young people. Rob Ferrett hosted the show for Kathleen Dunn.

Rob Ferrett in for Kathleen Dunn

from Thursday, August 2, 2012 at 10:00 PM The Summer Olympics are well under way, but chess is not included in the list of events even though it is an officially-recognized sport. This hour, Rob Ferrett and his guests discuss the benefits, history, and cultural significance of chess.