Chess journey to the center of the Earth in New Mexico 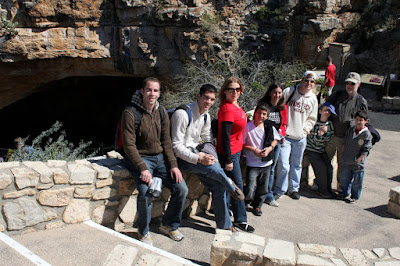 Chess journey to the center of the Earth in New Mexico
http://reports.chessdom.com/news-2009/chess-carlsbad

After extensive research by numerous people in the past month, I am told that this is a world record for a chess tournament.

The event was officially approved by the National Park Service. NPS also provided all members of SPICE and the Knight Raiders complimentary entrance to the Caverns.

We departed from the Texas Tech Student Union Building at 9 a.m. and arrived at Carlsbad Caverns a little more than three hours later. Once we arrived, members of SPICE and the Knight Raiders descended nearly 800 feet below ground and it took about an hour to get to the playing location. However, everyone enjoyed the breath-taking sight of spectacular stalactites and stalagmites along the way.

The weather in the cave is a mild and comfortable 56 degrees year-round. The tournament started at 2 p.m.

In addition, according to the official Web site, "Carlsbad Caverns is one of over 300 limestone caves in a fossil reef laid down by an inland sea 250 to 280 million years ago. Twelve to 14 thousand years ago, American Indians lived in the Guadalupe Mountains; some of their cooking ring sites and pictographs have been found within the present day boundaries of the park."

After the tour of the Big Room, our group got back to ground level, just in time to witness the fascinating bat flight. Approximately 500,000 Brazilian (commonly called Mexican) free-tail bats call Carlsbad Caverns home during the summer. At 5:25 p.m, the bats came out of the caverns in circular formation then headed off to find food. The bats eat several tons of insects each night. We were told by the park rangers that this may be the last or one of the last bat flights of the season as they migrate to Mexico for the winter.

It was a fantastic chess experience for everyone involved. We are now searching for the next exciting chess place to explore. If you know of one, please feel free to e-mail me your suggestion.

Big thanks to the U.S. National Park Service for making this possible and for their wonderful hospitality, Texas Tech University, and Peggy Flores for making all the arrangements for SPICE and the Knight Raiders. More information about SPICE and future events can be found at www.SPICE.ttu.edu

The event was officially approved by the U.S. National Park Service. In addition, all members of SPICE and the Knight Raiders were provided complimentary entrance to the caverns by the Park Service.

Once arrived at , members of the Knight Raiders manually descended nearly 800 feet below ground. It took about an hour just to get to the playing location. Before and after the tournament, everyone had a chance to tour the magnificent caverns.

We were even lucky enough to witness the fascinating Bat Flight at . At 5:25 pm, approximately 500,000 - 600,000 bats came out of the caverns. We were told by the park rangers that this may be the last or one of the last bat flights of the season as they migrate to for the winter.

Here is the link to 95 pictures from the Carlsbad Caverns Blitz Chess Tournament: http://picasaweb.google.com/SPICEChess/CarlsbadCavernsChess. Videos of each round will be posted on YouTube shortly.

Big thanks to the U.S. National Park Service (http://www.nps.gov/cave/index.htm) for making this possible and for their wonderful hospitality, Texas Tech University, and Peggy Flores for making all the arrangements for SPICE and the Knight Raiders.
Posted by Chess Daily News at 10/21/2009 09:41:00 PM No comments: 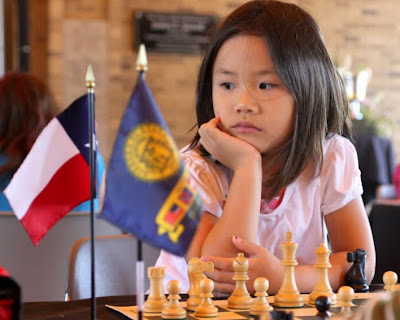 When Team USA was in its formative stages for the NAYCC 2009, I was very excited to know that Emily Nguyen would be participating. She captived our family's attention with her performance in the Susan Polgar National Invitational 2009.

I had no recollection of Emily prior to the SPNI 2009. Although I was not at the SPNI this year, the only girl wonder that impressed me was Annie Wang from the 2008 SPNI. After analyzing the game that Annie Wang and Claudia played, I told my daughter that she was fortunate to have won the game. We both agreed she had a special talent. Therefore, I did not think another girl wonder would come up the pipeline.

It was not hard for all of us to realize that Emily, if she continued in chess, would be someone of importance. 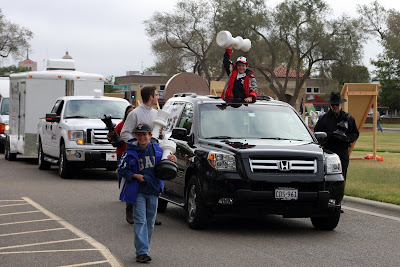 Here is the link to 100 pictures from the 2009 Texas Tech Home Coming Parade.

LUBBOCK, TX (KCBD) - Members of Texas Tech's Knight Raiders chess team will venture into the world of stalagmites and stalactites October 17th when they participate in a tournament inside Carlsbad Caverns.

The officially rated blitz chess tournament, which is sponsored by Texas Tech's Susan Polgar Institute for Chess Excellence (SPICE), will take place in the cavern's lunchroom, which sits more than 750 feet underground in the Big Room.

Paul Truong, director of marketing for SPICE, said he is not aware of another chess tournament that has ever been organized in a cavern before.

"The message we want to give is very simple," Truong said. "Chess is fun, and it can be played anywhere. We want to change the social stigma that chess is a boring game for old guys." 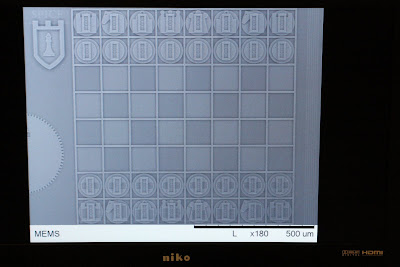 Dr. Tim Dallas, and his students Ashwin Vijaysai and Granapathy Sivakumar, have just created a SPICE Chess Set with the dimension of 1mm x 1mm. This was created out of the MEMS lab (MicroElectroMechanical Systems) at Texas Tech University. The SPICE Chess Set even has the SPICE logo on it :)

Here is the link to 32 pictures of this 1mm x 1mm chess set.

Great job by Dr. Dallas and his students!

Last year, I reported about the world's smallest chess set here. The dimension of that set is 0.25 cm.

The SPICE Chess Set is smaller than both of these sets.

Chess from the center of the earth 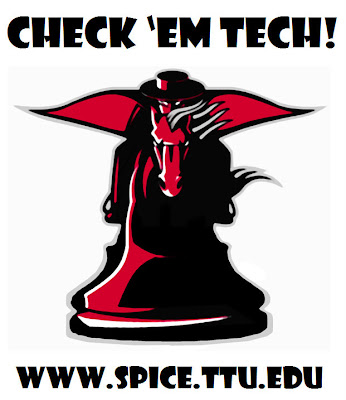 The Texas Tech Knight Raiders chess team members will be playing a rated chess tournament from the center of the earth (not literally)in about 2 weeks. It will take them about an hour just to manually descent about 1,000 feet to the spot where they will have the tournament. Then they will engage in a 6 round SS tournament. The event has been approved by the National Park Service. Stay tuned for more details.