'I'm Always the Only Girl' 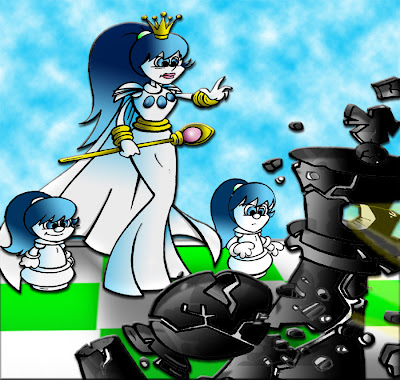 In the 1993 film Searching For Bobby Fischer, a young chess prodigy watches his gift for the game develop as he squares off against a group of streetwise chess hustlers in New York's Washington Square Park.

Were there such a group of aggressive players nearby, 13-year-old Janna Borg of Norwich would probably jump at the chance to join them. But, “you don't have places like that in Hanover,” Janna's mother, Dominica, said. The next best thing is the Hanover Chess Club games, held on Saturday mornings at the Howe Library in Hanover. Janna Borg is a regular fixture.

On a Saturday morning last month, it was just Borg and 5-year-old Michael Ding Jia playing against one another while their parents watched. Borg's young opponent was having a hard time sitting still and concentrating -- two attributes he'll need if he wants to continue growing as a player.

Aware that Michael was both less attentive and experienced than she, Borg saw this game as a teaching opportunity. When she saw Michael make risky moves, she gave him tips. “The only safe place for you to move your queen is here,” she said, pointing to an empty spot on the board. “I'm not sure you want to lose your queen.”

She also reminded him of the basic rules of the game. “I'm afraid black can't go first,” she said, after she and Michael switched sides on the board. “It's against the rules.” And even after Michael decided that he’d had enough, Borg told him, “Thanks for the game,” anyway.

First introduced to chess in the second grade by her older sister Faraday, Janna Borg stunned everyone in her family when she won third place in a chess tournament at Richmond Middle School less than a year later. Now, having just begun the eighth grade at Richmond last week, she's a regular not only at the Howe pickup games on Saturdays, but also at the Vermont State Scholastic Chess Championships, where she placed first in the fourth-grade division in 2008; earlier this year, she placed ninth in the middle school competition.

Chess is something of a Borg family pastime. Janna credits her father Scott for teaching her how to strategize when playing, and Faraday Borg organized The Sharon Academy's chess team, which won the high school state championship this year.

Chess offers players a chance to strategize and keeps them on their toes, which is what Janna Borg appreciates about the game. “There are so many possibilities,” she said. “It's a lot more complex than other games, say, like, checkers. And with each move, a lot more opportunities open up to move more places, and the games are never really quite the same.”

For the chess wary out there, Borg also offers encouragement. “Once you get the hang of it,” she said, “it's not really as hard as it would seem. And it's a whole lot less boring.”

If Borg has grown as a player these past years, there has been one constant: her opposition, which has almost always been male. When she goes to compete, “I'm always the only girl,” she said, with a tone of resigned acceptance.

This past July brought a welcome change in competition. Janna was nominated by Mike Stridsberg, who organizes the Vermont State Scholastic tournaments, to represent the state at the Susan Polgar Foundation Girls Invitational, held this year in Lubbock, Texas. The girls-only tournament is led by Susan Polgar, the first woman to earn the Grandmaster title in chess through tournament play. Over the course of a week, the girls attending had the opportunity to learn from Polgar, a world champion in chess many times over, and practice their skills against other girls in a tournament.

Playing chess against boys has never fazed Borg in the years she's been playing. But attending the Polgar Invitational allowed her to see that she's not alone among girls in her passion for the game. “It was just really nice to have it not be odd that I played chess and I was a girl, because it was all girls, and they were all really good. It was special,” she said.

One girl under the age of 19 from each state is invited to take part, and Borg was one of 46 girls who attended the invitational this year, out of a pool of 3,000 female chess players nationwide.

“It's really a very big accomplishment for somebody to even get here, regardless of the result once they get here, because they have earned the right to compete for their state and the national title,” Polgar said in an interview this week from Lubbock, where she coaches the chess team at Texas Tech University.

Polgar is no stranger to the gender discrimination in the chess world. In 1986, she became the first woman to qualify for the Men's World Chess Championship, but was barred from playing; the World Chess Federation later relaxed its rules to allow women to compete. Chess has traditionally been viewed as a man's game, Polgar said, “just like playing cars is viewed as such, or playing with dolls is seen as a girls’ thing.” She founded the Susan Polgar Foundation in 2002, and has made it her mission to promote chess play among girls and women.

“I really hope they got inspired,” she said of the invitational's participants, “that being a girl is not a handicap when you play chess, that they made friends, that they made connections, and that they'll understand that just because of the peer pressure or the lack of opportunities in some cases, they shouldn't give up, and chess is for girls as well.”

At the state-level chess competitions in Vermont, Stridsberg has observed a number of girls compete in the lower elementary grades, but their numbers decrease in the upper elementary and secondary divisions. He estimates that for every eight to 10 boys in a chess competition, there's one girl, a ratio that puzzles him.

“I've always seen chess as the great equalizer,” he said. “It doesn't matter how tall you are or how strong you are. It's just you and another person and a chess board.”

Before attending the Polgar Invitational, Janna had encountered some chauvinism when she'd go to chess tournaments. Any doubts that her competitors may have had about her abilities, however, were soon put to rest.

“When I first started playing in tournaments, I noticed that the guys were kind of surprised when I sat down in front of them. They were kind of looking at me with the ‘maybe you're in the wrong room' kind of look,” she said.

“And sometimes, I would lose, and it'd be no big deal. They expect to win against the girl. But if I won, well, the look …” Janna paused, and grinned, “was priceless.” 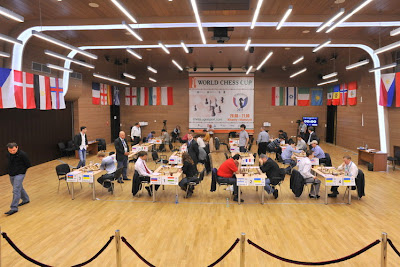 There were many fighting and exciting games is the Round 3 of the World Cup. Sergey Shipov annotates the most interesting fragments.

The main sensation occurred at the first table. Despite all the achievements of Judit Polgar, people still tend to underestimate her. Which, of course, benefits her at the board...

If the Black’s bishop arrives to b7, White’s hopes are gone, so she needs to hurry.

The White’s bishop breaks to the queenside pawns. In order to defend Black need to solve a tricky study. Sergey did not succeed.

Here Karjakin began to think again, but it was already too late.

The magic of the bishop pair could create an impression that Black survives even without a pawn, but Polgar can cast the anti-spell.

The opposite-colored bishops don’t affect the evaluation here because of the passed pawn.

Black easily survives, if we remove the knights from the board, but it is not going to happen.