Chess Tactics for Champions: A step-by-step guide to using tactics and combinations the Polgar way (Paperback)

Susan Polgar is a Grandmaster, winner of 4 Women's World Championships, a gender barrier breaker, a Chess Ambassador, and World Record Simul holder. Her sisters Judit and Sofia were trained by their father and his methods produced the strongest women players in history. So how does this benefit you?

If you are a beginner to intermediate player [Remember, chess is 99% tactics], so practicing all the puzzles over and over will improve your ability to see tactics and not drop pieces to them. I cannot recommend this book enough for those wanting to get serious about their chess.

This review was cited from Amazon.com.

This item was also found at: 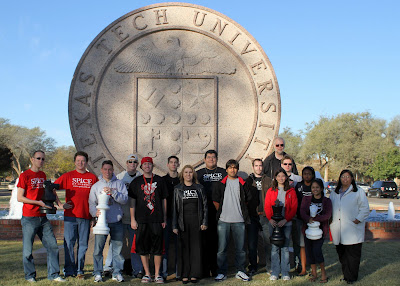 In just two short years, Texas Tech University SPICE (Susan Polgar Institute for Chess Excellence) has grown leaps and bounds. In our first full recruiting year, we have about 20 students, including 3 over 2500 FIDE.


In our second full recruiting year (fall 2010), this number will double to around 40. Students from all over the U.S. and around the world (India, Holland, China, Hungary, Azerbaijan, Israel, Canada, Brazil, Kazakhstan, Argentina, Russia, Uzbekistan, Lithuania, Romania, etc.) have either applied to Texas Tech or seriously inquired about various chess scholarships.

Inquiries and discussions for chess scholarships have also begun for the fall of 2011, which include a number of GMs with FIDE ratings between 2600 and nearly 2700! In addition to chess scholarships, there are also many other types of scholarships. The key is to apply as early as possible since scholarships (chess and non-chess) are limited.

But SPICE is not just for IMs, GMs, or top rated players. We have many students with ratings of 1500-1600 up to expert level who enjoy an excellent education at Texas Tech University while having the opportunity to learn, play, and improve their chess. Many of our students are either on the Dean’s list or in the Honors’ College.

At Texas Tech, we work hard, play hard, and having fun doing it. The camaraderie level among players is high. Everyone is helping each other. There are many tournaments and fun events year round. There are plenty of community outreach programs and we interact very well with local organizations, government, and media. Because of this, we receive a lot of support from the area.

Chess fever is growing high at Texas Tech University and in Lubbock, Texas. If a program like this can be created from the ground up in just two short years, it can be duplicated in other places. In the past, I have worked very hard to promote and support scholastic chess, women's chess, chess for girls, chess in education, military chess, correspondence chess, internet chess, etc. College chess is now another part of my chess promoting effort.

Texas Tech offers students a choice of more than 150 bachelor’s, 100 master’s, and 50 doctoral programs. Faculty members are nationally known for their work in a wide variety of fields. It is the ONLY institution in Texas with a graduate school, a law school, and a medical school in the same location as the main undergraduate campus. Overall, there are 14 colleges at Texas Tech University with 62 academics departments and 198 degree programs. No other chess program can compare to this.

More than 400 clubs and organizations provide enrichment outside of the classroom.

Texas Tech also many other locations such as San Angelo, El Paso, Spain, and Germany, etc. It is expected to be designated as a tier one university soon.

Why should a student / chess player come to Texas Tech?

Here are just a few of the many benefits:

SPICE is a premier center for chess education, research, technology, and outreach.

The goal of SPICE is to:

- Recruit outstanding undergraduate and graduate students to TTU and TTU-HSC

- Provide a substantial amount of scholarships to chess players

- Be a world leader in promoting women's chess

- Promote chess as vehicle for enriching the education of children

- Serve as a center for chess education and research

- Support and promote competitive chess at the college level 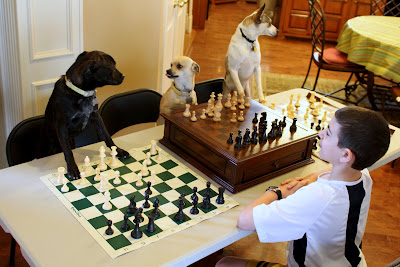 Boogie displayed bad sportsmanship by sticking his tongue out and made fun of Tiger for not playing the more aggressive 1.e4. As a penalty, Boogie lost his treat for not conducting himself at the highest level of professionalism :)

Quincy, on the other hand, always has a problem staying focus. 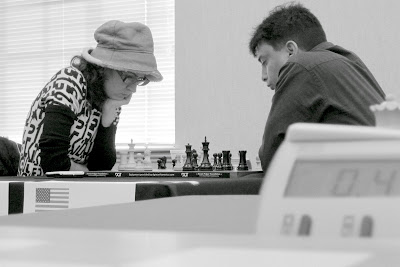 
Here is the link to more than 460 pictures: http://picasaweb.google.com/SPICEChess/SPICESpringSelect

Here is the link to many videos during the SPICE Spring Invitational: http://www.youtube.com/user/chessmarketing#p/u 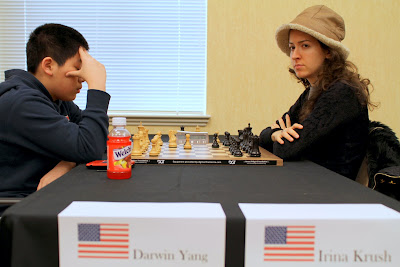 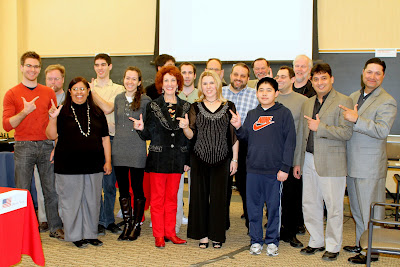 It all came down to silent blows on miniature battlefields.

Some of the world's top chess minds convened in a second floor room of Texas Tech's English building this week.

The thick and heavy silence almost betrayed the scale of the showdown.

In the motionless minutes between moves, the 10 chess wizards at five tables tunnelled their vision into the board. Some waited for their opponents to move by pacing the room, pausing to watch or consider other games.

On the surface, there's not much action here.

But look a little closer.

Each move carries with it surgical precision and intellectual moxie. The players' eyes said it all: This is no insouciant day of board games.
It's war.

They came to the tournament, the SPICE Spring Invitational, from four countries and seven states only after receiving a special invitation from Tech's Susan Polgar Institute for Chess Excellence.

Now in its second year, the tournament brings some of the world's brightest chess stars together to battle for a better title. Each move is broadcast via Internet in real time to many thousands of enthusiasts across the planet.

Paul Truong, the institute's spokesman, said the invitational tournament caters to some of the younger, less-experienced players by giving them a chance to duel grandmasters. It is only through doing so that they can bump their own titles up - for instance, from the World Chess Federation's FIDE master title to international master, the level just below the highest distinction of grandmaster.

"This is more like a launching pad for the younger hopefuls who want to be a top-tier player," said Truong. "It's not about the (approximately $1,500) prize. It's about getting their title. That, for them, is way more valuable than just a paycheck from here."

This plight of the younger players makes for less cautious chess, he added.

"They really have to fight," Truong said. "It's just the fighting spirit, every game, grinding it out."

Among those at this year's tournament were grandmasters Julio Becerra of Miami, Ben Finegold of St. Louis and Jesse Kraai of San Francisco.

Becerra won after the tournament's nine rounds of play. Finegold tied for second with SPICE's own Gergely Antal, originally from Hungary.

The youngest among the players, 13-year-old phenomenon Darwin Yang sat across from renowned chess titans many times his age, holding his own, calculating his next move.

Now in his fifth year of playing, the seventh-grader from Plano hopes to soon earn the distinction of international master. He spent more than a week at the SPICE tournament going head-to-head against opponents of all types.

No, he said. Not anymore.

Yang finished seventh at this week's nine-round tournament. He could have done better, he said.

"I'm going to go home and spend lots of time working on those (mistakes) so next time I can win the tournament," he said.

International master and two-time U.S. women's champion Irina Krush finished eighth. She, like Yang, was disappointed in her overall performance.

"I won my first game. I won my last game," the New York City native smiled. "I try to forget everything in between."

Becerra, the tournament's winner, said the tournament's competitors all had similar ratings going into the competitions. He appreciated the high level of competition and plans to return to Lubbock this fall for the institute's next major invitational. 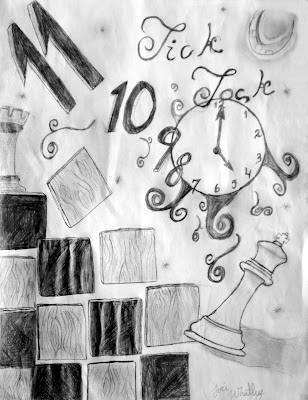 Tori Whatley, former representative to the SPNI from South Carolina, did this chess drawing. She is also very involved in her local community to promote chess and bring chess into the schools. Well done Tori!