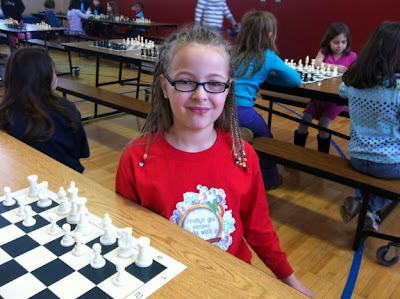 I am sitting in a gym that is packed with waiting families. Moms, dads, sisters, brothers—we are all settled in haphazardly, surrounded by brown bag lunches, newspapers, discarded winter coats and hats and gloves. Practice chess boards are set up on some of the tables, pieces scattered mid-game.

The girls are in the other room, playing yet another round of chess during this all-day girls’ chess tournament for the elementary school students.

Fifteen minutes ago, the pairings went up, and the girls raced over to see who they would be playing. Books were left lying face-down on tables, opened to carefully mark the spots. Parents gave kisses and hugs and good luck wishes, and the girls bounded into the other room.

I am now chatting with V, a mom whose 4th-grade daughter is also competing in the tournament. “The girls’ tournament is one of my favorites,” she commented. And the moms whose daughters are competing are some of my favorites – caring, kind, intelligent, diverse -- beautiful from the core.

In one of the local middle schools, the instructor who runs the chess club has said that, “middle school girls don’t play chess,” because so few girls join his club, and of the girls who do join, most have dropped out by mid-year. Of course, statements like that do not help the situation.

“I wonder if he is creating a self-fulfilling prophecy,” V said, “or if he is just jaded by what has happened.”

I think about all the little girls here today. They have readily chosen to spend their entire Saturday playing games of chess. What will happen to them as they enter middle school to make them pull away from the game?

Less androgeny is acceptable as kids enter sixth grade, and the girls are often shunted into an appearance-driven world of make-up, clothes and fashion. Chess is labeled the territory of boys, and the girls drop by the wayside. There is extreme social pressure not to choose the “wrong” activity.

This morning, Katie donned her Pigtail Pals shirt, the one that says, “Pretty’s got nothing to do with it” on the front. The back of the shirt lists plenty of other characteristics to redefine a girly girl, such as “inquisitive, intelligent, determined, etc.”

For those of you who don’t know the history of this particular shirt, it was created by Melissa Wardy of Pigtail Pals last year in response to a ridiculous shirt that JCPenney was marketing.

The JCPenney shirt said “I’m too pretty to do my homework, so my brother has to do it for me.” Pigtail Pals lead an outcry against the shirt, and eventually JCPenney pulled it.

I thought the “pretty’s got nothing to do with it shirt” would be a perfect one for Katie to wear today. I don’t know whether she will want to keep playing chess in middle school. But I certainly hope she will remember how she feels today, surrounded by a gaggle of chess-playing girls, laughing and smiling and having fun.

Beauty is found on the chessboard, in a well-played move, in the flash of a gap-toothed grin. Value is found in the strategies the girls use to move their pawns and rooks and horses, and not a single girl came out of the tournament thinking, I won that game because I am pretty.