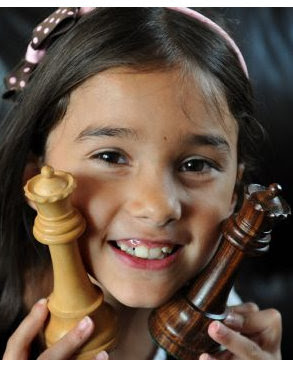 Her opponent, a news photographer, never stood a chance.

The Palmdale second-grader is a national chess champion, dominating the K-3 age group in the prestigious Susan Polgar World Open for Boys and Girls in 2010 and 2011.

She placed third in 2009, her first year of competition.

She's also the youngest in the country to win a high school tournament at age 6.

The previous record-holder was a 7-year-old boy in 1987 - who happens to be her half-brother.

"It doesn't matter how old you are," Gia said on a recent afternoon.

During the last World Open, held near Chicago in October, she beat a rival whose coaches were both grand masters.

The match lasted no more than half an hour. The year before, Gia took home a grand prize that included a college scholarship.

Her father celebrated the feat.

"Gia has talked about becoming a doctor," said Richard Peterson, a former financial analyst and chess tutor who became disabled in 2003 after sustaining a brain injury when a trailer collapsed on him.

"In no way is chess the goal - it is just a tool for the kids to get to where they really want to go," Peterson added. "It trains their minds, gives them critical thinking skills, and that's something that's simply not taught in school."

Gia's siblings - 12-year-old Michail, 10-year-old Dante, and 6-year-old Jayani - also are accomplished players, even though the youngest is still learning how to read and write. They also have a half-brother and a half-sister, both adults who were national champions in their youth.

All four of them won trophies during a scholastic chess tournament in Ridgecrest, Kern County, last month. Their combined record: 19-0.

"Chess is fun," said Dante, a three-time regional champion in his age group, whose signature strategy involves taking over the space in a chessboard until his opponent has nowhere to go.

Dwight Morgan, who has organized children's chess tournaments in Ridgecrest for 40 years, considers the Peterson kids - particularly Gia and Dante - among the best he's seen at their age.

"A couple of tournaments ago, Gia won the high school section and bested boys and girls from ninth grade through 12th grade," he said. "It was quite something to see these tall kids, 13 to 18 years old, holding small trophies while the petite Gia, who was only 8, had the biggest trophy of them all."

"To see a young girl doing so well is really great for the sport as far as encouraging other girls," he added, noting boys have tended to dominate the game.

Gia and Dante are the most competitive in the family. They partnered once and outscored rival teams with four players each.

It was Dante who brought chess back into the household after his father's accident.

"I didn't want to play chess because the pain was just awful," Richard Peterson said. "Whenever I tried to concentrate, it would make my head throb."

Dante, then a kindergartner, pursued his chess passion on his own and eventually "dragged" his mother, Deepika, to local tournaments. Soon, she was taking the rest of the children as well.

"Dante really wanted to go, but I remember when (then preschooler) Gia first sat down to play, she was so scared of all the people around her that she started crying," Deepika said.

The owner of a trophy-making business, Deepika tried to comfort the children if they got upset after a loss by telling them, "If you want a trophy, I'll make you one."

She never actually resorted to creating those consolation prizes though, because the children soon started winning regularly.

They honed their chess skills by reading books, solving problems on an educational CD, and competing online with adults.

Despite all that, the children are well-rounded, getting A's at school and playing tag and other activities with their peers.

Their family room has a huge collection of trophies and medals in one corner. More awards are stored in boxes inside the garage.

Peterson, who began to recover from his brain injury in 2008, hopes those accomplishments will ensure a bright future for the children, though he hopes the game will not be the sole pursuit of their adult lives.

"We want chess to be an avenue to other things," he said.