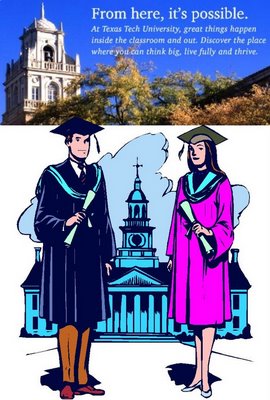 University of Texas in Dallas (UTD) has been one of the leading universities in this country in recognizing chess. UTD is also a big supporter of the Annual Susan Polgar National Invitational for Girls. TTU hopes to emulate the success of UTD.

Big thanks to TTU for their support!

Dear GM Polgar (or Ms. Polgar if you prefer):

My name is Peter Harris. I am a 1400 player from Lubbock, Texas. I often work with Dr. Karlsson at Knight Raiders chess club. I'm not currently a student, but joined the club in 2002-03 when I was starting a doctoral program in fine arts.

I met you briefly at the fall 2005 Knight Raiders Open, where you presented me with a book prize and we talked for a minute or so to a television reporter for informational purposes.

Since I met you, I have become a newspaper editor for the small communities of Shallowater and Wolfforth, which are near Lubbock. Dr. Karlsson organized a chess tournament at an intermediate school (at the time, grades 5 and 6) in Wolfforth in January of this year, and I put the story on the front page. The school will become an elementary school(grades pre-kindergarten through 5) this coming year, so I am not sure how the tournament will be organized in the coming years.

I did not know until you posted it that you had spoken at some of the commencement ceremonies. Thank you so much! I was out of town on the day of graduation and Dr. Karlsson did not tell me ahead of time. Shame on him!

I do have a question I hope you will address at some point. You and FM (or Mr.) Truong have both left the competitive arena for teaching, writing and exhibition chess. So have many other masters. Could you suggest a way to organize a tournament for these players and other masters who have left competition?

I have thought about a masters-only tournament along the lines of Lone Pine (1973-1981), but I wonder about the details -- what prizes to award, how to accommodate the masters (in living conditions, conditions in the tournament room, and opportunities to promote chess).

One idea I have is to pay point money to all players who play all the way through the tournament (no money for people who withdraw), with the top 20 or 25 receiving prizes along with the point money. I would also like to see what people think would be fair time controls, how to schedule games, and activities during time off. I would actually like to use the "Fischer increment" of one minute per move, perhaps at 40/100 followed by 20/50 (plus the increments).

I really want to be able to notate and publish every move of every game. With one exception, I have always written down my moves even while in time pressure, because I want to preserve my games and perhaps publish them.

I would also be interested in finding out about how to award scholarships to junior players. How many total, in what amounts, and should there be age and gender classifications?

This is a very long letter and I do not have any firm plans of any kind yet, but I hope you have a chance to read it through and consult with other masters and grandmasters about their ideas. I would love to be wealthy enough to become philanthropic, and if I achieve the first goal I would appreciate your help on the second.

You did not miss it! Its next year!