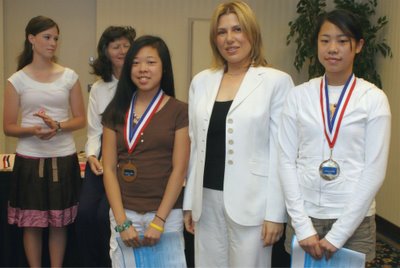 My sister, my brothers, and I are back from one of the most eventful trips of our lives; namely, the U.S. Open and Susan Polgar National Invitational for Girls. If someone cared to ask me to sum up my experience in Chicago as a whole, I would have to say “surreal.” My siblings and I came across so many surprises along the way from the beginning of Utah’s qualifying event to the end of the 2006 Polgar Invitational, that it hardly seems like something that would happen in our everyday life.

Our first surprise came at Utah’s Polgar Qualifying Tournament back in April; our first, yet unfortunate surprise. My sister Janice had represented Utah at the Polgar Invitational the previous year, and she fantasized all year this year to play as Utah’s representative again. Having worked hard, she was confident she’d win the qualifying event, as were we. Sure, I played in the tournament as well; but it never came across to me realistically that I’d be able to represent Utah; I participated in the tournament merely to support my sister.

However, the results didn’t come as we thought they would; we were stunned to learn that Janice hadn’t won. Coincidentally, it seemed that the moment she had lost, it started to rain. Unable to calm herself, Janice left the tournament room at once, running into the rain and walking more than two miles, drenched with not only water, but fury and unhappiness. Her confidence and hope was renewed, fortunately, when she learned she’d be getting another chance at making it to the Polgar tournament in Las Vegas. If she could win the under fifteen-year-old section at the Girl’s World Open Championship, she would receive an invitation to play in the Polgar event at the U.S. Open.

In the months before the event, Janice played chess constantly, studying from whatever chess book she could get a hold of at home. This hard work paid off. Throughout the week of the tournament, she was like an indestructible force -- nothing could take her down, not even an bitter cold. Winning the under fifteen section and a berth to the 2006 Polgar Invitational in Chicago, we were all elated.

My family and I thought that was it. My dad would take Janice and two of my brothers to Chicago. She would play in the Polgar, and my brothers would be participating in the Open and various side events. In the meantime, I’d stay home and baby-sit my youngest brother while my mother was busy. It was all set, weeks and weeks in advance. Yet, a mere two days before they left, my father got a phone call; the type of phone call that nobody expects -- not at the last minute, anyway. I was informed that the girl who qualified as our state representative wasn’t going to be attending the tournament, which meant that I would be qualified to take her place and represent Utah alongside my sister. I was shocked, to say the least. After all, I definitely hadn’t even thought, let alone planned, on representing Utah in Chicago.

Although I was completely unprepared, I jumped at this opportunity. Cramming two weeks worth of clothing and other necessities into a duffel bag, my father, sister, two of my brothers, and I clambered into our minivan and began the long, two day road trip to my birth state of Illinois. I was so excited for numerous reasons. Firstly, that I’d get to represent Utah with Janice. Secondly, that I’d get to visit the state I was born in for the first time since I was one year old. Oh, and not to mention…thirdly, I’d get to drive for a few hours on the roads; I had just gotten my license a few days prior to our leave, so needless to say, although it had nothing to do with chess, it was pretty eventful for me to get to plow right on down the freeways.

Finally, after what seemed an eternity, the day came. At the opening ceremony, I listened anxiously as the states and their representatives were announced, eagerly awaiting my turn to be recognized. And when my turn came, yet another surprise hit my family and I. “From the Beehive State, representing Utah in the Polgar are Alice Chen and Janice Chen. And representing Denker is…” The answer was something we never would have expected. “Tony Chen. Boy, that’s a lot of Chen’s!”

It took a minute to register what the announcer had just said. Yes, it was a lot of Chen’s. And one of them was a very unexpected one, at that. Our brother. None of us knew he’d been chosen as Utah’s Denker representative, not even himself. At the time of the ceremony, Tony, in fact, had been downstairs, in a heated game in the Quads event, unaware he was to represent his state. When my father hurried down to inform him of this shocking yet exciting bit of news, Tony, although he had been up two pawns in his game, was in such awe he lost in a matter of minutes. Talk about the effects of surprise!

After six days of animated games, the Polgar and Denker tournaments came to a close. Although we felt we might have been able to do better, we did feel we did considerably well, taking into account the nature in which we entered the tournament. We had risen to the best of our abilities, playing our way through thick and thin. The end of it was here. And there was one more surprise in store for us. Colin, our brother, at the tender age of ten, had outperformed us all; finding glory in several of the side events he participated in on a whim, just for fun, he came home with well over a hundred dollars in cash. Startling? Quite.

This whole experience has been so amazing, not only for me, but for my family as well. Representing Utah alongside not only Janice, but Tony as well was an occurrence I might never be able to come across again. Really, what are the chances of something like this happening in everyday life? It was all so surreal. It’s something that I’ll cherish forever.