Spreading the love of chess 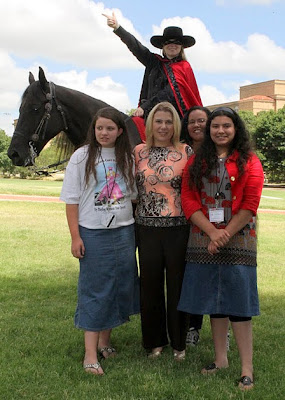 Annastasia and Amelia Wyzywany, participants of the SP Girl's Invitational last year, started a scholastic chess club. The club began in September 2010. They club has had a steady stream of children joining. Currently the club has 26 members of which 7 are girls. Annastasia conducts most of the lessons while Amelia checks to see if students are understanding and need help one on one. Here is what Annastasia and Amelia wrote:

Amelia and I teach a chess club for kids. We have been teaching our chess club for one school year. We have 26 kids and seven of them are girls. Most of my teaching materials I use I learned from the SPGI and your website. All the girls love hearing about the SPGI and hope that they earn an invite someday.

Our four year old sister Alexandra plays chess at the chess club. The kids love to play her because they think it is cool a four year old can play chess. The first time we had chess club we brought our trophies. The kids liked the trophies and asked how they could win them. We told them they have to play and beat other kids in a tournament.

The kids love to come to the chess club, one of the Moms said that it is her son's favorite activity. My little brother Francis teaches the new kids how the pieces move. It is always fun to go and see the kids smiling faces and to teach them to play.

The kids love to hear about the tournaments and can't wait to play in a tournament. We will have our first tournament in March, the kids are excited to play in their first rated tournament.

Our goal is to teach the kids as much as we can. When I am teaching and no one will answer I say things like "come on, its free today". When it is a puzzle and they win a piece I say "bye bye sweetie pie". Both sayings I learned from my coach Mr. Angelito Abella.

When we started playing chess there were no kids in the local chess club. In our first tournament we had only adults to play. We started a chess club for kids so when other kids play in tournaments they would have kids to play instead of just adults, and have people to play at their level too. We also started the chess club to grow chess in our town. We also teach chess to kids of all ages at the Volunteers of America.

This is an amazing family and it is a privilege to know them. The girls are fantastic chess players and true ambassadors for chess!