Chess and Italy: What could be better 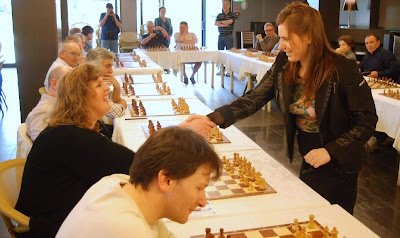 Chess and Italy: What could be better?
Holly McRoberts

Set in majestic Lido Adriano, Italy, chess players gathered from twenty-seven countries and eagerly waited to demonstrate their skills at the Inaugural International Ravenna Chess Tournament on April 2nd through April 10th of this year. As the only American, I was fortunate enough to be amongst those players, and a guest at the Grand Hotel Azzurra, which not only sponsored this event, but also provided a welcoming and relaxing ambiance. Every room in this beautiful hotel had a balcony overlooking the Adriatic Sea and access to a private beach.

As if the incredible accommodations were not enough, the highlight of this tournament featured a guest appearance by Judit Polgar who graciously gave a simultaneous exhibition at the generous price of only ten Euro per participant! Of the twenty-five players, Polgar achieved 24 wins and 1 draw.

Diana Mihajlova not only did an excellent job of organizing this event, but she made all the players feel welcome throughout the tournament. She and the tournament winner, Sarunas Sulskis, kindly invited me to have dinner with Judit Polgar, which I felt was an enormous honor!

Sarunas Sulskis of Lithuania won the tournament from a strong field of 10 GMs, 8 IMs, and 1 WGM in addition to the other class players. He was a favorite amongst the amateurs due to his humble and kind demeanor as well as his willingness to help struggling chess players such as myself. When asked if his first coach was proud of his great accomplishments his response was, “I’m just an ordinary GM.” This is coming from an individual who was second to Ivanchuk, studied at the Botvinnik-Kasparov School, and is a five-time Lithuanian champion.

Being the only American at the event, I felt it was my noble duty to “represent!” Unfortunately, as a class C player, I could not “represent” in the manner or form in which I intended.

Fortunately, Sarunas Sulskis, and the well-known tournament organizer, Stewart Rueben, took pity on this poor American soul and offered their time, patience and wisdom in an attempt to develop my skill as a tournament chess player who eventually achieved 3 out of 9 points.

So, walks on the beach, wonderful food; dinner with Judit Polgar, and personal training from a GM made this trip truly memorable. If this article inspired jealousy in any way, do not fear! You still have the opportunity to experience this amazing event for yourself: the tournament will be on next year, and possibly even this year in the autumn (subject to confirmation), as the organizer’s intention is to hold the tournament twice a year. For more information, visit www.ravennachessinternational.com. This website contains all the information including results, pairings, selected PGN games, and fantastic photos.
Posted by Chess Daily News at 4/27/2011 12:35:00 PM

Email ThisBlogThis!Share to TwitterShare to FacebookShare to Pinterest
Labels: Italy