An inexpensive but effective way to help kids 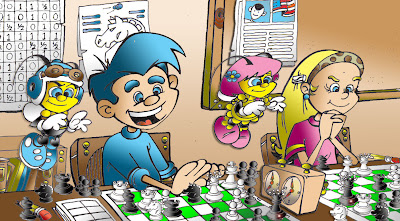 The question of this week is are there countries that include chess as part of the school curriculum, and why is chess so important?

I have addressed this issue in the past, but I will cover it again since it is so important.

According to research, test scores improved by 17.3 percent for students regularly engaged in chess classes, compared with 4.6 percent for children participating in other forms of enriched activities.

In approximately 30 nations across the globe, including Russia, Brazil, China, Venezuela, Italy, Israel, and Greece, etc., chess is incorporated into the scholastic curriculum. Just as sports are a part of the important agenda at schools in the United States, chess has been that way in the European Nations abroad.

Chess is in many ways like life itself. It is all condensed in a playful manner in a game format, and it is extremely fascinating because you are in complete control of your own destiny. You have to be responsible for your actions. You make a move, you had better think ahead about what is going to happen, not after it happens, because then it's too late.

Chess teaches discipline from a very early age. It teaches you to have a plan and to plan ahead. If you do that, you'll be rewarded. If you break the rules, you will get punished in life and in chess.

Chess has long been regarded as a game that has outstanding beneficial effects on learning and development, especially when it is played from a young age. Below are some of the most critical benefits that chess can provide to a child:

• Develop analytical, synthetic and decision-making skills, which they can transfer to real life.

• Learn to engage in deep and thorough chess research, which will help them build their confidence in their ability to do academic research.

• Help children gain insights into the nature of competition, which will help them in any competitive endeavor.

• When youngsters play chess they must call upon higher-order thinking skills, analyze actions and consequences, and visualize future possibilities.

• In countries where chess is offered widely in schools, students exhibit excellence in the ability to recognize complex patterns and consequently excel in math and science.

Countless researchers and studies have shown over the years that chess does indeed strengthen children's mental clarity, fortitude, stability, and overall health. Many schools are now finding chess as an inexpensive but essential and effective way of helping kids grow mentally. In this technologically driven world, chess helps aid in the synthesis and growth of certain areas in the brain and mind where many children can benefit as they grow older from the game.

I have been working closely with Region 17 and Lubbock ISD regarding chess in education and in the schools. Many schools in Lubbock now have chess. SPICE has also made a presentation to the University Interscholastic League in Austin over the summer to include chess in UIL competition. Stay tuned for further development.

• Here are some of the questions and answers from a recent event of mine:

1. Who, in your opinion, is the most overestimated and the most underestimated player in the history of chess?

Over, not really. Under, some such as Bronstein, Korchnoi, Keres, Polugaevsky, etc.

2. Which slogan would you use in a chess advertisement?

"Get Smart! Play Chess!" I created this slogan and it has been used in many local chess events right here in Lubbock.

3. Which prejudices about you personally or your chess would you like to do away with?

My goal in chess is to promote this game the right way globally so it can benefit generations to come. My love is chess. I will dedicate the rest of my life to promote and expand this game the way it should be. Chess in education is very important to me.

4. Which characteristics of chess players are typical?

Perhaps too much focus in the game and not enough the beauty of life. There should be a balance.

5. Which topics should be discussed more among chess players and in the chess press?

For chess players, how to unite for the best interest of our game in the future. No rule should be made to benefit one player. Rules should be fair for all chess players. For the chess press, let's focus more on the so many benefits, interesting and positive things about chess instead of overdoing it with the negative stories.

6. What would you like to learn in your future life and what do you regret not having learned?

I never stop learning. When I was a professional player, I focused on being the best in chess. Now I focus on promoting chess; promoting chess in education; organizing top-notch tournaments for professionals, amateurs, and young people; getting more sponsorships; writing chess books and columns; making chess DVDs; teaching chess; running SPICE; trying to be a good mother, etc.

I would like to continue to improve in all of those areas. There is no reason why a chess player cannot be successful in many other areas other than playing the game. I am sorry I never learned to play any instrument ... yet.

7. Which dream are you still hoping to come true?

Bringing chess to the mainstream! I believe it can be done. I will do everything in my power to help make this happen for the benefit of our entire sport.

8. What is your life motto?

In chess: "Win with grace, lose with dignity!"

9. Which abuses/injustices around the world you would remedy/abolish if you had the power to do that?

10. Which question would you like to be asked and what would be your answer to that question?

Why do I still focus so much in chess? I love this game. It has given me so much in my life. But there are many flaws that stop the expansion and growth of it. So instead of criticizing while doing nothing, I decided to fix things and make it better for my colleagues and for chess players of future generations. If everyone only talks about the problems, it will not be fixed. We must take one step at a time to fix things and I am willing to work and cooperate with anyone who also wants good things for chess.