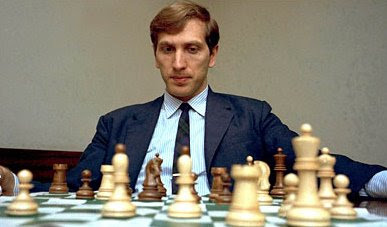 Here is one of great games by Bobby in the historic 1963 U.S. Championship.

This is one of the classic victories of the legendary Bobby Fischer from the 1963 U.S. Championship where he scored an incredible 11–0. Around the time of this game, Grandmaster Benko was ranked as one of the top ten players in the world.

4.f4 With this move White gains more space and is considered the most ambitious way to counter the Pirc.

6...Bg4?! Black jut pinned White’s Knight. However. if the pin is not sustainable then such a move does not make much sense. The better options according the opening theory are: 6...Nc6 or 6...Na6.

7.h3 This is a good response. It forces the Black Bishop to either trade (as Black continued in the game) or retreat.

9.Be3 This is a natural developing move which at the same time also protects the attacked d4 Pawn.

14. 0–0 Castling to the other side was also a reasonable option.

15.Qg3 This is good looking attacking move which creates a pin over Black’s Bishop and threatens with 16.Bh6. However, 15.Rad1 may have been even better.

16...c6 17.Qh5 White is slowly but surely inching closer and closer to Black’s King. White’s plan is to trade on d4 next, and then open up the light squared Bishop’s diagonal with e4-e5.

19.Rf6! A truly impressive move which made it to countless combination books in the past half a century. The idea of the move is simple: to prevent Black’s f7-f5 defense after White’s e Pawn advances!

20.e5 h6 Here there are numerous ways which lead to win but the simplest is as Fischer continued 21.Ne2!

Here Black resigned as the situation is hopeless. The Knight is hanging on d6. If it moves away, White responds with 22.Qf5 with a checkmate threat on h7. If 21...Bxf6, then 22.Qh6 and it is game over.

This is a truly brilliant game by the 20–year old Fischer.