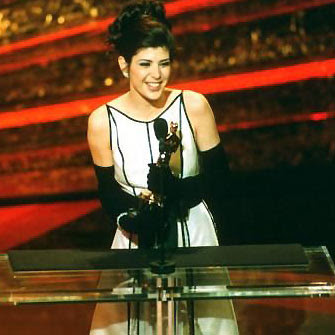 Marisa Tomei has a place in the Village, a busy film career, a solid reputation among theater folk (she's done Shakespeare in the Park and Broadway with Pacino), and even three Oscar nominations -- including a win, for "My Cousin Vinny.

"Still, there's one thing she wishes she had more of: time.

"I always feel like I'm caught with my pants down," she confesses, with a short, staccato laugh.

Apart from her constant drive to do better, and nagging worry that she'll never get another role -- also part of the actor's tool kit -- Tomei looks content. Although she's dated a playwright and a couple of actors over the years (including Downey, back in the day, and Logan Marshall-Green) she seems happy to be single. She never shows up on the gossip pages, staggering into or out of nightclubs.

And she stays focused.

"I just remembered this thing I read (in the paper) when I was, like, 15 and just starting to think I wanted to be an actress," she says. "It was the quote of the day, and one morning it was from this young girl who was a chess champion, Susan Polgar, and it was in response to, you know, what is it, what makes you a champion? And she said 'Concentration. Dedication. Imagination. Meaning.'

"I tore that out of the paper and kept it for a really long time," Tomei says. "I made it my goal then. And it's become my mantra since."