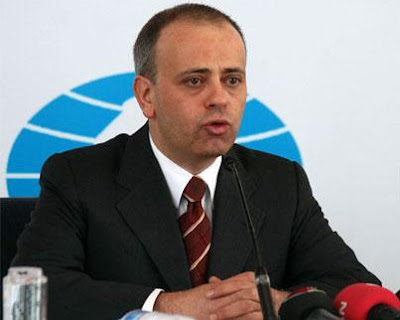 I recently had a chance to sit down with Mr. Ali Nihat Yazici, President of the Turkish Chess Federation, during the Khanty-Mansiysk Chess Olympiad. I first met him in 2004 at the Calvia Chess Olympiad. Since then, he has done tremendous things for chess in Turkey, especially in the arena of scholastic chess. Here is the summary of our chat.

The president of the Turkish Chess Federation (TCF) Ali Nihat Yazici had a dream, which had become a real fairytale story.

In 2002 Ali on behalf of the TCF approached the minister of education of Turkey with the idea of introducing chess in the schools. At that meeting, he was asked, what is his goal with the project?

He made a “blunder” by responding with the question: “Can you imagine Turkey having the next Karpov or the next Kasparov?” His dream was rejected at that time. However, he learned his lesson. He realized that the approach had to be modified.

Ali had to wait over two years before he got the next opportunity to present the “new plan” to the next minister of education. He was asking for an appointment for over two years. One night out of nowhere he received a phone call from a contact to come and meet in ten minutes. The minister was having kebab with the contact and he was willing to give Ali ten minutes! He was on his way immediately. When Ali met the minister, he presented the idea of chess in the schools to help educate the next generation of Turkish children to grow up more intelligent.

After his presentation, the minister said thank you and told him that it sounded very interesting. He said he will be in touch. Ali left the restaurant and thought sure the minister will call…one day.

To his biggest surprise, the next morning shortly after nine, his phone rang. It was an unknown number. It was no other than the minister who he met the previous night. The minister invited him to meet and discuss the idea further. As Ali was driving at that moment, he almost caused a mass accident in his (pleasant) shock.

Well that was 2005, the year when chess was introduced for the first time in some Turkish schools. Since that time, the number of school children involved in the chess program grew to 2,250,000 in over 10,000 schools, with around 50,000 chess teachers! Mind boggling numbers!

The TCF chess in the school project currently receives 1.5 million euro in governmental support. That is a huge number! However, through the various forms of taxes, the project also generated 1.8 million in revenues for the government.

In addition to the support from the public sector, the TCF succeeded in attracting major contribution from the private sector. Since 2005 IS Bank supports scholastic chess with 1.6 million Euros to enable schools in need to also introduce chess to underprivileged children.

The TCF has developed its own teaching manuals and recommended learning materials for students. 300,000 of the first edition of the student “source-book” was printed by the non-profit branch of the TCF, Satranc. Many doubted Ali’s decision at the time, asking “what will we do with all those copies?” Since then, over two million copies were sold, and it became a major source of revenue for the project.

In Turkey, chess for the past five years has been a part of the curriculum as an elective. There are only four elective subjects: art, painting, religion (general) and chess. The children who chose chess as an elective learn it two hours a week throughout the entire 32 week school year.

This year in the city of Burdur (west of Turkey) the Turkish Chess Federation started a pilot project with kindergarten age children, starting at age four. So far it was very well received, and the TCF has donated already 10,000 chess sets and boards to the project.

While the above project mostly focuses on the social benefits of chess as a side effect, a certain percentage of kids naturally will take a more serious interest in the game and desire to compete. At Turkey’s 2009 scholastic championship, 30,000 school children took part. There are around 1,300 chess clubs in Turkey today. 14 of them compete in the first division. Each of those clubs receives 12,500 euro support yearly from the TCF. The TCF currently has 200,000 paid members, including 60,000 rated players.

In the first division team league, many of the players have contracts guided by the template designed by TCF. The league is designed after the most successful professional sport in Turkey, which is soccer.

While historically Turkey hasn’t been known as a country with much chess traditions, in the past decade or two it made leaps of progress. Today Turkey can pride itself with having 4 home-grown Grandmasters and 12 International Masters.

A very impressive story! Certainly today Turkey is a place to learn from and an example to follow for any country which would like to see chess being a part of the curriculum.

Congratulations to the Turkish Chess Federation and personally to Mr. Ali Nihat Yazici for the job well done!

Email ThisBlogThis!Share to TwitterShare to FacebookShare to Pinterest
Labels: Ali Nihat Yazici, Chess in Education, Chess in the Schools, Turkey