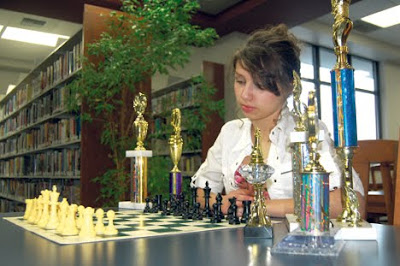 SANDPOINT — Savanna Naccarato formulates her strategy and carries out her moves in a split second.

Across the table, her father Chris, no slouch at chess himself, struggles to keep up. The effort is mostly for show — within minutes, he’s prolonging a lost game.

“Are you sure you want to do that?” Savanna asks on his final move before checkmating him.

This wasn’t always the case. Only a few years ago, Savanna’s father was the one dolling out defeats.

“Dad got the chess set, but he didn’t have anyone to play,” she said. “We kept playing and playing with me getting more and more frustrated every time I lost.”

But instead of calling it quits, Savanna turned to dedicated practice. All that work paid off. Now 13 years old, Savanna trains under some of the nation’s most respected chess masters, and by their estimation, she is one of the best female players in the country.

Although she has obtained that status in only a few years, Savanna has put a lot of work into her game. And she started out small, training on computer programs. Before long, she entered her first tournament at age nine.

“I lost miserably, but I started looking at other people’s moves,” she said.

Around that time, she started becoming a formidable opponent for her father. The defeats in her early days of chess slowly reversed until Naccarato could no longer beat her. Savanna’s second attempt at a chess tournament landed her in fifth place.

When Naccarato realized that his daughter possessed an exceptional talent for the game, he began seeking coaches to help Savanna hone her skills. While she played against local chess enthusiasts, Naccarato eventually found Savanna mentors in some of the Northwest’s most accomplished masters.

Boise instructor Daniel Vellotti has had the most experience training her.

“Outside of my family, Savanna ranks in the top two most talented players I’ve ever worked with,” Vellotti, who estimates that he’s coached more than 10,500 students, said. “There is a list of the top 100 players in America, and I think she has a chance to break into that list very soon.”

When she first started training with him, Vellotti said that she was already a strong chess player.

“She had a good grasp of the fundamentals and was ready for the next step,” he said.

“At one point, I sent her some ring pops and told her, ‘You can have these after you beat an opponent with a rating of 2,000 or higher,’” he said.

In a model that she would follow with other expert trainers, Savanna and Vellotti practiced primarily over the phone and Internet. Using chess computer programs, the two analyze various tactics and strategies while conversing over speaker phone.

“When she plays with masters, they see things that are completely lost on me,” Naccarato said. “It’s kind of like a joke that everyone gets except for you.”

As a player, Savanna is characterized by a notably aggressive style that relies on strategy to gut opponents later in the game.

“I always find myself attacking the king’s side,” she said. “I’ve been criticized for that because I’m not always thinking about my own king’s safety.”

She also has a remarkable capacity for forward-thinking — testing revealed that she planning between seven and 20 moves ahead at any given point of the game.

Seattle master John Graves, who has trained Savanna for three months, said her style was quite similar to his own. He’s even taught her some tricks to capitalize on her aggressive style.

“Savanna can basically take this as far as she wants to go,” Graves said. “If you love chess, there’s a spark that occurs as you learn new concepts, and she definitely has that spark.”

Savanna certainly seems keen on pursuing chess as far as it will take her. She practices constantly regardless of tournament scheduling. While she’s put a lot of hard work into her game, it helps that chess is also a great source of fun for her.

“The best thing about chess is that no game is the same,” she said. “Every move is a mystery.”

For being a nightmare on the chessboard, Savanna is remarkably understated. Quiet, well-spoken and humble, she eviscerates her opponents in the most pleasant way possible.

“She’s extremely polite and smiles, but then she rips you hard on the board,” said Naccarato, who hasn’t beaten his daughter in three years. “I know from experience.”

Outside of chess, Savanna is a normal young teenager. Whenever she collects prize money in chess tournaments, her first stop is J.C. Penney. The oldest of the three Naccarato kids, she’s had a strong influence on her siblings. Her 10-year-old brother Garrett has won four chess tournaments himself, while two-year-old Adaline already knows all her chess pieces.

Thus far, Savanna has won 19 trophies and four medals. In February, the Idaho Forest Group sponsored her at the 2011 Idaho Scholarship Girls Championship, where she ranked in a three-way tie for first place.

Although she isn’t even in high school yet, Savanna has big plans for her future.

“I’m hoping to use chess to get a scholarship so I can go to a good school,” she said.

Her ambitions don’t stop at education. Savanna hopes to become Idaho’s first female grandmaster, an outcome that her trainers said they can easily envision.

In the short term, however, Savanna has been invited to represent Idaho at the Susan Polgar National Invitational For Girls in Texas. The Naccaratos are hoping to secure sponsorship from a local business or organization to help with the traveling costs. As for her chances in the tournament, Savanna is keeping her expectations grounded.

“There will be girls there that have been playing much longer than I have,” she said. “Even if I win just one game, I’ll be pleased.”

And her instructors? They’re betting a little more ambitiously.

“I wouldn’t put it past her to beat all of them,” Vellotti said.