One man against the chess world 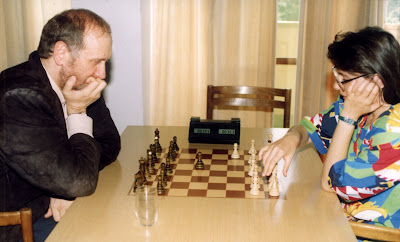 In 1958, 14-year-old Robert James "Bobby" Fischer stunned the chess world by becoming the youngest grandmaster in history, launching a career that would make him a legend. Over the next decade and a half, his breathtaking rise to the top of the game riveted the world and inspired an international chess phenomenon. Then, at the apex of his success, Fischer disappeared from the public eye.

The revealing documentary BOBBY FISCHER AGAINST THE WORLD, debuting MONDAY, JUNE 6 (9:00-10:45 p.m. ET/PT), exclusively on HBO, chronicles the chess master's meteoric rise, culminating in the historic 1972 match against Boris Spassky in Iceland, as well as his shocking withdrawal from competition and the paranoia that derailed his life. The film was a 2011 Sundance Film Festival selection.

Beginning with BOBBY FISCHER AGAINST THE WORLD, HBO Documentary Films presents another weekly series this summer, debuting a provocative new special every Monday through Aug. 15. Other June films include: "A Matter of Taste: Serving Up Paul Liebrandt" (June 13); "Sex Crimes Unit" (June 20); and "Hot Coffee" (June 27).

Directed by Liz Garbus (the Oscar(R)-nominated "The Farm: Angola, USA"; HBO's Emmy(R)-winning "Ghosts of Abu Ghraib"), BOBBY FISCHER AGAINST THE WORLD explores the complex life of the troubled genius whose charisma and talent spurred a worldwide fascination with the "game of kings." Fischer's evolution from childhood chess prodigy to global superstar, angry recluse and, finally, fugitive from the law is a spellbinding story of the making and unmaking of an American icon.

Raised in a modest Brooklyn apartment, he overcame an unconventional and difficult childhood, learning to play chess at age six. While his brilliant but distracted single mother, Regina, was pursuing her passion for Communist politics, the eight-year-old Fischer was regularly playing, and beating, more experienced adults.

"Chess is like my alter ego," Fischer once told a journalist. As he rose in the ranks of the game, his obsession with winning and lack of social finesse led others to call him a prima donna, eccentric, paranoid, even "the most arrogant man in the world," but no one could argue with his supremacy at the table.

Providing an unprecedented look at the man behind the headlines, the film weaves together news clips dating from the 1950s to the 2000s, photographs, letters - many never made public before - and exclusive interviews with friends, fans and colleagues. Interviewees include: chess champions Gary Kasparov, Susan Polgar, Larry Evans and Dr. Anthony Saidy; authors David Edmonds and Malcolm Gladwell; talk-show host Dick Cavett; Paul Marshall, Fischer's personal attorney; Harry Sneider, his trainer; and photojournalist Harry Benson, who was granted unfettered access to Fischer during his training for the 1972 championship, as well as during the competition. Garbus also draws on a wealth of archival footage, along with never-before-seen photographs by Benson, to create a searing portrait of a brilliant but elusive man whose life was shattered by obsession and mental instability.

BOBBY FISCHER AGAINST THE WORLD spotlights the thrilling 1972 world championship match between Fischer and Boris Spassky. Breaking down the historic tournament game by game, Garbus deftly highlights the parallels between the 21-game marathon and the tense geopolitics of the Cold War era, with the eccentric Brooklyn Boy facing the brilliant Soviet-sponsored grandmaster. Televised throughout the world, the competition was held in Reykjavik, Iceland and became a focal point of the U.S. and Soviet Cold War tensions, which at one point required the intervention of national security advisor Henry Kissinger. As Kissinger explains, "The Soviets had been winning these tournaments and I thought it would be good for America, for democracy, to have an American win."

Garbus also documents his later years, which were marked by disastrous choices and bizarre behavior. The reclusive Fischer's triumph over Spassky transformed him into the most famous man of his day, to his chagrin. In 1975, he refused to defend his championship against the young Anatoly Karpov, opting to forfeit rather than risk the public humiliation of a loss. He gave up competitive play at the height of his powers and withdrew from public life, occasionally appearing incognito at obscure chess clubs.

Fischer's laser-like focus, ability to anticipate multiple threats and drive to utterly dominate his opponents made him all but unbeatable. But the same qualities that made him a grandmaster poisoned his relationships, skewed his worldview and began to erase the fragile line between genius and madness. Unable to trust and unwilling to bend, Fischer became a fugitive from his own success.

Twenty years later, Fischer's return to professional chess for a rematch against Spassky in Sveti Stefan led to his indictment by the U.S. government for ignoring UN sanctions against Yugoslavia. After Sveti Stefan, he faced ten years in prison in his home country, and spent more than a decade evading arrest. The increasingly isolated, Jewish-born Fischer lashed out at perceived enemies in bizarre anti-Semitic and anti-American rants, driving away his few remaining friends. With his U.S. passport revoked, Iceland was the only country to offer sanctuary to the former superstar, now almost unrecognizable as the man whose early promise and dashing looks helped make chess the most popular board game in the world. In 2008, at age 64, Fischer died in Reykjavik, the site of his greatest triumph. But the legacy of his games remains today.

Two additional featurettes will be available on HBO On Demand.

"The Fight for Fischer's Estate" (seven minutes) tells the story of the many claims to Fischer's two-million-dollar estate, featuring exclusive interviews with Marilyn Young, his Filipino girlfriend, Jinky Young, her daughter, claimed to be Fischer's daughter by Marilyn Young, and Russell Targ, Fischer's American brother-in-law. Also included is archival interview footage of Miyoko Watai, the Japanese woman who claims to be Fischer's wife. Since Fischer's death in 2008, these parties have been fighting for control of the estate. Two years later, after battles in Icelandic courts, his exhumation and subsequent DNA tests finally laid the matter to rest.

"Chess History" (five minutes) explains the origins of the game, its infinite complexity and enduring popularity. The segment features a wealth of unusual archive footage, plus interviews with Garry Kasparov, a respected chess authority and one of the best players of all time; Susan Polgar, a four-time women's world champion and five-time Olympic champion, who provides a brief "lesson" on the various powers of the pieces and basic rules of the game; and noted chess authors David Shenk and David Edmonds.