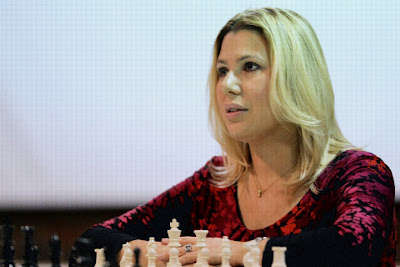 The woman I met two years ago at the Congress of Racial Equality's annual Martin Luther King gala certainly deserves to be a feminist icon. Yet when I checked the Web site of the National Organization for Women for anything on Susan Polgar, I found nothing. Instead, the Web site promptly spit back, "Do you mean Susan Pleasure?" Surely a woman who had broken the gender barrier time and time again and had developed a foundation for young girls that would improve their self-esteem and assuredness deserved some notice by this women's group. Alas, Ms. Polgar's achievements are in the male dominated world of chess — that great game of cerebral excellence and strategy — not politically correct issues.

On June 25 the city hosted the highest-rated round robin chess competition in America's history — the Mayor's Cup. In spite of Ms. Polgar's stellar record of four World Women's Championships, five Olympic gold medals, and Grandmaster status, the Hungarian-American mother from Queens went into this event under low expectations.

I asked her about the difficulty of the event. She said, "Before the event, I was unsure of my performance because it is incredibly hard to combine being the organizer of the event, a devoted chess mom, and being one of the players at the same time. This is a very big handicap. In addition, there was a lot of pressure being the only woman in the highest rated ever chess tournament in U.S. history. If I do well, it is a big boost for women's chess in America. However, there are many critics who were just waiting for me to fail so they can say that a woman has no business competing against top-level male players."

What little I know about the world of chess has been derived from headlines about the eccentricity of Bobby Fischer and feature films of other child prodigies. Historically, chess champions are also predominantly male Europeans. I also know that Ms. Polgar competed in other events playing simultaneous opponents and scored a spectacular win record (see www.susanpolgar.com). How did she do, I asked? She told me, "I was the lowest rated player in this tournament. Many people said the odds of me winning this tournament is like the odds of winning the lottery. Many believed that I would finish in last place by a significant margin. I gave it my best shot and I was one half point away from winning the strongest tournament in U.S. history."

Raise your hand if you've never heard of Ms. Polgar but have heard of Annika Sorenstam's failed attempt to qualify for the PGA tournament. Yet Ms. Polgar's demolishment of gender barriers in the last 25 years has actually reduced the chauvinism in chess competition.

Speaking of her battles, she said, "One of the most painful experiences was in 1986. I was the first woman in history to qualify for the ‘Men's' World Chess Championship but I wasn't allowed to compete. The official reason was I am a woman and no woman is allowed. Luckily by the end of that same year, because of my case, the International Chess Federation changed the rule by deleting the word ‘Men's' from the name of the event. Since then women, if they qualify, can compete for the overall world title. I have stood up for the rights of women chess players around the world in the past three decades and I will not give up until we have the same rights and conditions as our male counterparts."

Ms. Polgar started playing when she was just 4 years old and soon won the championship of Budapest in her native Hungary with a perfect score (10–0). She was a hyperactive child who discovered that chess enabled her to focus for hours. Why not chess instead of Ritalin, I asked? Susan agreed that chess is certainly more fun than medication and added, "I strongly believe that chess can help all children educationally and chess will give them many incredible benefits throughout their lives. This is even more important for girls as it can help enhance their self-confidence and self-esteem."

The women I truly admire are those who face enormous wrath for telling the truth, as Phyllis Chesler did when she spoke of the feminist hypocrisy ignoring the plight of battered Islamic women; and women like Susan Polgar who break down gender barriers without demanding that they be altered or lowered.