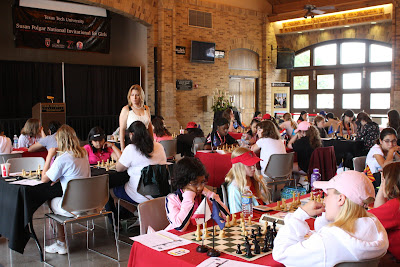 Autumn Douthitt, a freshman at Montgomery Central High School, recently returned as the Tennessee representative for the Susan Polgar National Invitational for Girls chess tournament. Autumn won four out of six games, finishing the tournament in a tie for eighth place (19th overall) out of 60 competitors.

SPNI was held at the Frazier Pavilion at Texas Tech University in Lubbock, Texas. Each state was allowed at least one representative to compete in six games of chess.

Texas Tech University agreed to award a four-year full TTU academic scholarship — valued at about $75,000 to $85,000 — to the highest-finishing player who has not graduated from high school by August.

Autumn currently studies under National Master Henry Robinson of Charlotte. She is a member of the Montgomery Central High School Chess Team and also participates with the Clarksville Chess Club, which at 7 p.m. Thursdays in the Austin Peay State University library basement.

For more information about the Clarksville Chess Club, to online to www.clarksvillechessclub.org.