The Excitement Continues at Texas Tech 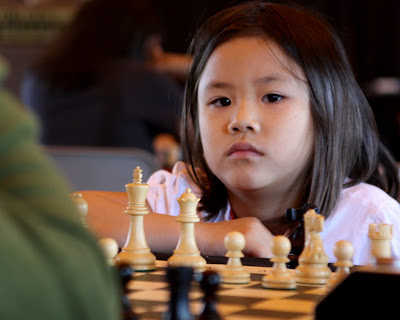 The Excitement Continues at Texas Tech

The final round of the 6th annual SP National Invitational for Girls concluded on Friday, July 31. Going into the final round, eight players could still mathematically win the championship.

Needing only a draw to clinch clear first, top seed Yang Dai still pushed hard for the win. It almost cost her the championship. Samyukta Bhat fought valiantly. The position was very close and Samyukta actually missed a chance to obtain an overwhelming advantage. But at the end, Yang’s nerve held up and she emerged as the winner! Congratulations to a deserving champion! Here are the three key last round’s games.

Here are the top ten finishers from sixty total players:

In addition to winning the national championship, Yang Dai and Fiona Lam teamed up to go 5-0 in the bughouse championship. Yang also finished second in the SPNI puzzle solving championship.

Other big winners include

Rachel Gologorsky of Florida: Rachel, also a member of the 2008-2009 SP all-star girls’ chess team. She finished in the main event in a tie for second place. Rachel and Epiphany also shared the $500 Ursula Foster award to the top girl under 14.

Yang Dai, Epiphany Peters, and Rachel Gologorsky also won scholarships to Texas Tech University. Each scholarship is valued at approximately $36,000 for out of state students.

Courtney Jamison of Texas, 2008 SPNI champion, is about to start her senior year in high school. As the top junior (entering the senior year) of the event, Courtney received a full academic scholarship to Texas Tech University. Even though Courtney won last year, she did not receive this scholarship because she was only a high school sophomore.

Once again, special thanks to all our volunteers, supporters, sponsors, parents and coaches, Texas Tech, the City of Lubbock, TX, Mayor Tom Martin, Visit Lubbock, and everyone else who made this tournament so special.