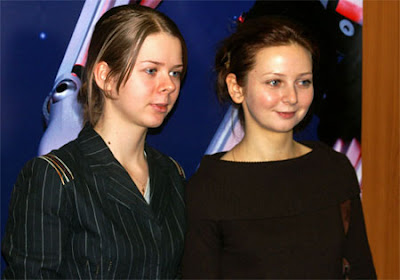 Last week, the World Chess Federation (FIDE) officially recognized Nadezhda Kosintseva as a Grandmaster. Her younger sister accomplished this title a few years ago. Congratulations to the Kosintseva sister for accomplishing this rare feat. Below is a game of Nadezhda earlier this year at the European Women’s Championship.

7.Bb5+ A smart intermediate move which creates commotion for the Black camp. If instead White would have played 7.Nf5, Black would follow up with the energetic 7...h5 8.g5 Nxe4 9.Nxg7+ Bxg7 10.Nxe4 d5 with a double edged position.

7...Bd7 8.Nb3 Perhaps being caught by surprise, White avoids the main line which continues with 8.Bxd7+ Qxd7 9.Nf5 h5. But this also means that White sacrifices a Pawn.

10.Qe2 Nxe4 Black follows the basic principal by capturing the central Pawn (versus a side Pawn) when you can. It feels that after 10...Nxg4 11.Rg1 White would have sufficient counter play for the Pawn.

11...a6 Another intermediate move to counter attack instead of directly retreating the attacked Knight.

12.N5d4 The best option. Of course 12.Nxd6+ would fail as Black's Knight would capture back with Ne4xd6, leaving White a piece down.

13.Bg5 Finally all White's minor pieces are developed and castling will be next on the agenda.

14.0–0–0 At first 14.Bxf6 gxf6 15.Nf5 looks very tempting, with White's Knight arriving to an excellent looking outpost. The problem is that the Knight is unable to maintain its position after 15...Ne7.

14...0–0–0 An interesting and probably better alternative was 14...Ne7 which questions the White Knight on d4, as the e5 Pawn would no longer be in a pin.

15.Nxc6 Qxc6 White is still down a Pawn. However, it is white who clearly has the initiative.

20.Nxb7! White goes all out to open up files on the Queenside against Black's King.

22.Ra3 Qc6 Again an only move to hold the position together.

23...d5 Again the best defense, opening up the diagonal for Black's Bishop, as well as preparing to block a future check on the a7-g1 diagonal, by pushing d5-d4.

26.Rc7! Similarly to the previous variation, this combination works well here too.

27...d4 28.Rxb7+ Kxb7 29.Qxa3 Let's evaluate the situation. Now that the clouds have cleared, White has a Queen against two Rooks, which normally would be fine for Black. However, in this case White's position is still to be preferred because the unsafe position of Black's King.

30.Qb3+ Now Black will end up losing more than one Pawn.

Great Post Susan! The Kosintseva sisters are very exciting to watch... Women's chess is a blood bath of simply awesome new talent at the moment!!

Here is a Link to my Blog: mattywebbchess.com